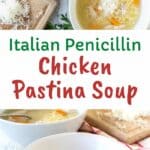 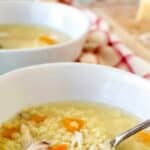 Are you looking for a comforting and satisfying meal that is easy to make and packed with flavor? Look no further than a nostalgic and classic bowl of homemade Italian Chicken Pastina Soup!

This beloved soup is made with small pasta and a flavorful chicken broth. It can be enjoyed on its own or with a variety of add-ins to suit your taste.

Whether you're looking to warm up on a cold winter day or simply craving a comforting and nourishing meal, Chicken Pastina Soup is the perfect choice. With its comforting flavors and satisfying textures, this classic soup is sure to become a staple in your kitchen as much as pasta al forno or chicken cutlets may be.

Just like minestrone soup, Chicken Pastina Soup is an Italian dish that has been around for centuries. Coming from the “cucina povera” or the kitchens of the poor, this soup uses basic ingredients and can vary slightly from region to region. The soup is traditionally made with pastina, a type of small pasta, chicken broth, and Parmesan cheese.

My family recipe for this soup begins with homemade chicken broth. This was a regular meal while I was growing up and like many Italians, evokes wonderful childhood memories. I knew this soup as "pastina in brodo" which means little pasta in broth. So pastina soup is what I turn to when I need something warming, comforting and soothing.

The key ingredient in Chicken Pastina Soup is the pastina which means “little pasta” in Italian. It's a type of pasta made from durum wheat or semolina flour, and it comes in several shapes, including stars, coins, and small shells. As well as having it with pastina, we'd have this broth with some homemade pasta like garganelli.

What you’ll love about Chicken Pastina Soup is:

So why not gather the ingredients, and let's make a tasty bowl of pasta soup together?

Be sure to try my amazing butterfly chicken recipe as well, it is surprisingly easy and delicious. Or my tender Chicken Limone which is a family fav!

Be sure to see the recipe card for exact quantities and detailed instructions.

Put the chicken wings, water, carrot, celery, onion and salt in a pot and bring to a boil.

Skim off the foamy scum with a spoon and discard.

Season with salt and pepper, reduce the heat and put the lid on ajar. Simmer for 1 ½ hours.

Strain the chicken broth through a sieve.

Separate the chicken meat from the bones and skin and dice the carrot.

Bring the chicken broth to a boil then cook the pasta in the broth over medium heat.

When pasta is cooked, return shredded chicken meat and carrots to the pastina soup. Add the parmesan and stir until creamy and well combined.

Hint: Bring the chicken broth to a boil before adding the pastina for it to be properly cooked. Adding the pasta before the the broth is boiling will result in mushy pasta.

If you love this soup, be sure to have a look at this extra quick version of Chicken Vegetable Soup.

Only make enough Chicken Pastina Soup for what you need and your family will eat because this isn’t the type of soup that keeps well. The pasta will absorb the liquid, swell and become too soft. It will be fine to eat the next day but it won’t be at it’s best.

However leftover homemade chicken broth without the pasta in it, will keep in the fridge for  3-4 days. Freeze the chicken broth in sealed containers for up to 6 months.

The shredded chicken meat will also freeze but not the cooked carrots. Cook a fresh diced carrot in the thawed broth before adding the pastina then the chicken meat.

The most important tip when making homemade chicken broth is to remove the foamy scum that rises to the top. Use a large spoon or a slotted spoon, which ever is easier for you, to gather it up and discard it. Keep repeating until no more foam or scum appears on the surface and your broth will be clearer and tastier.

Simmer the homemade chicken broth for at least 1 ½ hours to extract all the flavor from the chicken and vegetables. Be sure to taste the broth to check if it needs more salt. The cause of bland chicken broth is usually the lack of salt.

What is pastina made of?

Pastina which means “little pasta” in Italian, is just like regular pasta in a small form. Just like pasta it is made of wheat flour or semolina and water. Sometimes egg is included. Pastina is the tiniest form of pasta and is always used in soups.

When to add pastina to soup?

Add pastina to soup just before you’re ready to serve. Pastina like all pasta, should only be added when the cooking liquid or broth is boiling. After adding the pastina and stir well so that it doesn’t stick to the bottom.

Can you freeze pastina soup?

What is the difference between chicken stock and chicken broth?

Chicken stock is usually made with bones and is more concentrated. However, chicken broth is made with meat and vegetables and is thinner. Many people use either.

I often make a double batch of this homemade chicken broth to use:-

Made this recipe?
Let me know if you liked it by leaving a ★★★★★ star rating and a review below. Please share a photo of your creation by tagging me on Instagram @marcellina.in.cucina! 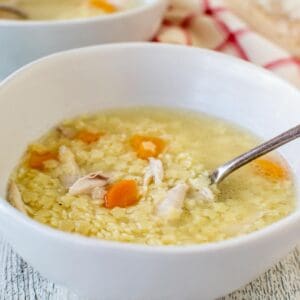 To make the Chicken Pastina Soup

Top Tips For more information and tips, please scroll up to read more.

Tried this recipe? I'd love to see!Mention @marcellina.in.cucina or tag #marcellinaincucina

This updated and improved recipe was first published on January 30, 2019.

We sometimes take for a granted that we have years (or decades) of cooking experience, that the average visitor may not. Add to, or remove from, the list below with health and safety tips.