Italian Calabrese Bread is a sourdough bread from southern Italy.

Sour dough bread!Ok, ok, I know you’ve all been creating starters and producing wonderful sourdough for some time but I really didn’t think it was something I could manage. I mean, think about it,  capturing wild yeast? To the uninitiated it does sound odd and slightly fairytale-like.  Does that mean we are walking around with yeasts floating about? I’m still not really sure about the science in it but I created a starter, it bubbled and frothed as it should and then I made chewy, crusty sourdough bread!I had been reading a little about starters and sourdough breads and had some great information from Rebecca  but it wasn’t until I acquired Rosetta Costantino’s book My Calabria that  I felt confident enough to try.A few days ago I created my starter. Rosetta’s starter requires a small amount of dried yeast to begin with, very similar to Rebecca’s however in a smaller quantity which suited me.  I followed the instructions and after three days prepared to make my bread.( And also prepared myself for failure!)  First I made the bread sponge and then the next day planned my time around the bread. After the first rise where I left it for 4 hours there seemed to be only a little lift. So I shaped the bread, one a “filone” and four “friselle”. I gently wrapped them in a cloth like babies and decided to use a barely warm oven for the second rising. Well, didn’t I get a pleasant  surprise when I unwrapped my “babies”. They had risen so proudly and  beautifully!

Admittedly I had such little faith in my starter that it could raise anything that I misshaped my bread. So the filone “fattened” and the friselle no longer had a hole in the middle. But never mind that, I was pleased my little starter had worked so well!

After baking in a hot oven the breads emerged crusty, brown and delicious. I am fascinated by the process and thrilled that it worked so well first up which has given me the confidence to experiment.

I can totally understand the respect Rosetta talks about that the Calabrese have for bread and the bread starter. Within my own family, bread is surrounded by traditions and beliefs and great respect. Though I have baked many loaves of bread I have never tried to make sourdough bread or a starter. What a thrill it was to have such success and I can’t wait to make more! 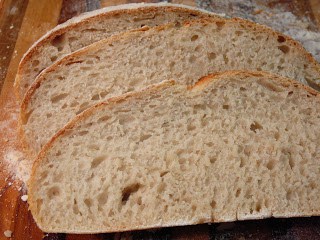 To create the bread sponge

To make the dough the following day

To create the starter